David Campbell is the editor of the Right Inbox blog. He is passionate about email productivity and getting more done in less time.
Learn More about Right Inbox
Jan 06, 2022

Back on April 1st, 2004, Gmail first went live. Due to the launch’s odd timing and the fact that it offered considerably more storage than its rivals, the tech world thought it was an elaborate April Fool’s joke.

The fact that it’s still going as strong as ever shows how much Google has invested in the platform since then. This isn’t surprising when the average worker receives around 121 emails a day. Your email service provider needs to be fast, reliable, and help you stay productive.

Let’s take a look at some of the most pertinent Gmail statistics that you need to know.

1. Gmail is still the most popular email service provider in the world, with over 1.8 billion users.

4. Gmail is becoming a popular choice for accessing your emails on the go. It’s estimated that around 75% of Gmail users actively access their emails from a mobile device.

6. Gmail’s machine learning blocks around 10 million spam emails each and every day.

7. Only around 0.1% of all emails that end up in your Gmail inbox are actually spam. An impressive number when you consider how many Gmail blocks.

8. Only around 0.05% of the messages that go into your Gmail spam folder are incorrectly marked as spam.

10. The average Gmail account is worth over three and half thousand dollars.

11. Nearly 70% of the emails that land in your Gmail inbox have been flagged by Google as being promotional. That’s a lot of marketing collateral to go through.

12. The average number of Gmail accounts owned per person is around 1.7. Usually, this is down to people having one personal account and one business account.

14. More than 20 billion emails have been migrated from other platforms to Gmail. That’s a staggering 28 million per day.

15. Gmail is popular with businesses as well, with around 60% of all mid-sized businesses in the US using Gmail as their email service provider.

16. Gmail is the email provider of choice for startups in the US. More than 90% of startups are using Gmail. 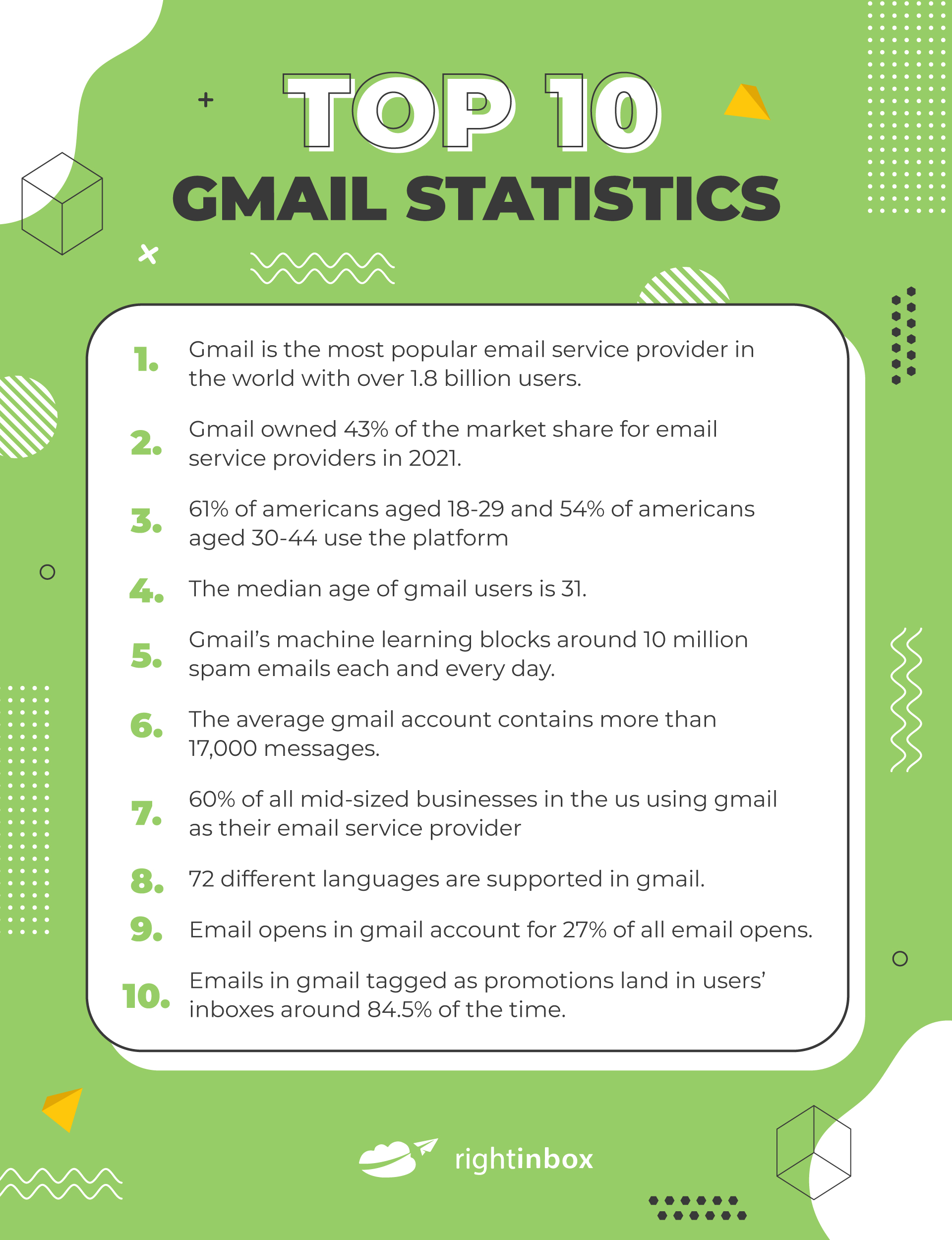 A study around how emails are tagged in Gmail by Marketing Charts highlighted some interesting statistics:

17. Emails in Gmail tagged as Promotions land in users’ inboxes around 84.5% of the time.

18. Emails in Gmail tagged as Social land in users’ inboxes around 87.2% of the time.

19. Emails in Gmail tagged as Updates land in users’ inboxes around 86.8% of the time.

The same study also shed light on the read rates of these three inboxes:

23. The longest ever outage for Gmail was back in 2009 and lasted for around two and half hours. It reported that during this time, approximately 100 million accounts were affected.

24. Google has consistently ensured that they offer more free storage than their competitors, which is one of the reasons they have retained such a large part of the market share. When it launched in 2004, users got 1 GB of free storage. One year later, to celebrate their birthday, Google doubled it to 2 GB.

25. As of 2021, Google is still offering incredibly generous free storage. It currently stands at 15 GB of free storage – although this is now across Gmail, Google Drive, and Google Photos.

26. In 2014, Gmail suffered its most significant data breach. Over 5 million logins were leaked in September of that year and posted onto a Russian bitcoin forum.

27. That leak also identified issues with passwords, with only 1% using a combination of numbers, symbols, and letters. This prompted Gmail to increase the security and strength of the passwords that its users choose.

This leak also highlighted other issues with passwords:

28. Of the passwords leaked, less than 8% contained more than ten characters.

29. Of the passwords leaked, less than 40% had lowercase letters only.

30. Of the passwords leaked, 42.5% combined numbers and lowercase letters – many of these were incredibly easy to guess.

31. 72 different languages are supported in Gmail.

32. Gmail has a 24-hour lockdown feature to protect users when it thinks that an account has been compromised.

33. Email opens in Gmail account for 27% of all email opens. 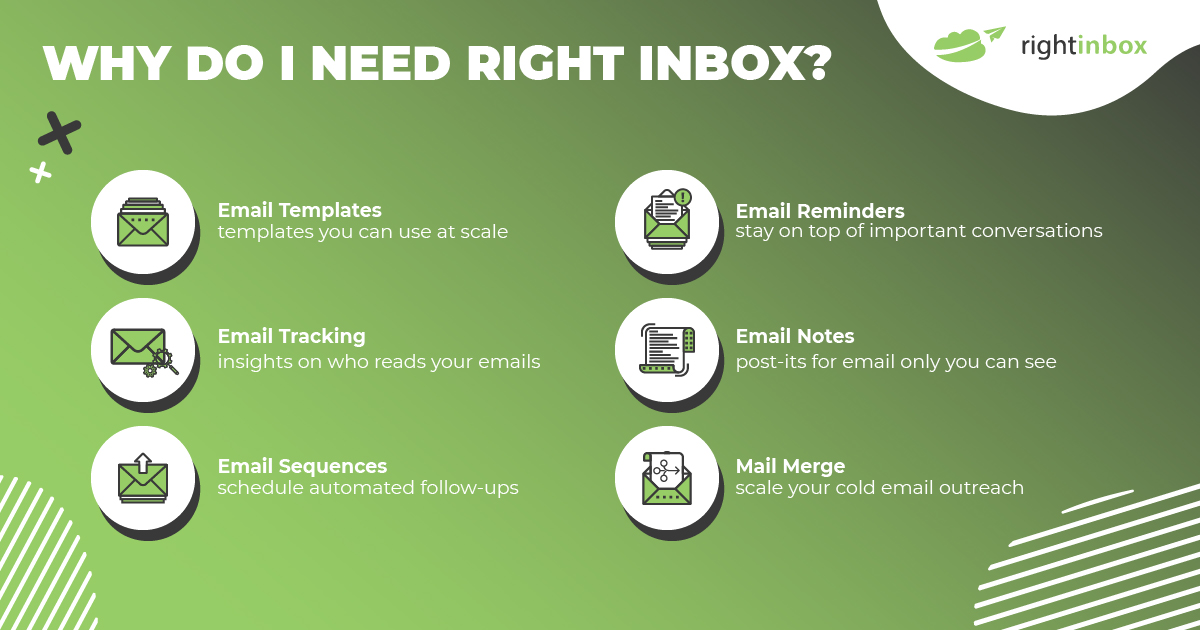 35. The average click-through rate of emails is around 3.1%.

36. It’s estimated that around 69% of emails flagged as spam are due to the email’s subject line.

37. If you include a question in an email that you send, you’re 50% more likely to receive a response from the recipient.

39. The most popular mobile client for checking emails is Apple iPhone at 29%.

40. For every dollar you spend on email marketing, you are likely to get a return of 42%.

How to Strengthen the Security of Your Google Account

How to Send a Text from Gmail

INSTALLS IN 30 SECONDS — WORKS WITH CHROME, SAFARI AND FIREFOX

Add to Gmail It's free!